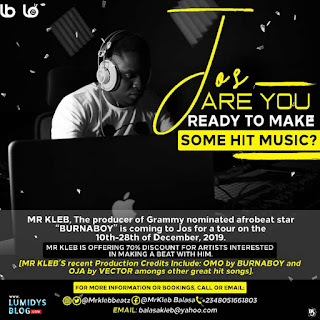 They are 60% responsible if a song will become a hit. And in this clime, the immensely talented music producer, Mr. Kleb is responsible for producing hit songs like ’Omo’ by Grammy Nominated Afrobeat Star Burna Boy, ‘Oja‘ by Vector etc. all bare testament to his talent.
Join 6,035 other subscribers
He is a major contributor to the highflying success of many super stars in Africa. This week, Mr. Kleb announced a grand opportunity for up and coming artistes in Jos (His hometown).
He is offering 70% discount for artistes interested in making beat with him.
For more info/bookings Email: balasakleb@yahoo.com or call: 08051661803
Join 6,035 other subscribers

RECOMMENDED POST  Let's Talk !!! Guys between a long distance relationship and being single which is the hardest ?

No votes so far! Be the first to rate this post.

Which Other Nigerian Artiste Apart From Spensive Can Beat Chest To Say “I Blew Up As An Independent Artiste”?

Artiste Of The Week

Plateau state lock down will last for 4 days not 14 – Governor Simon...

Theophilus Daniel - April 16, 2020
0
A lot of people have misunderstood the lockdown extension period, this is a little break down of the lockdown as said by his Excellency...

Theophilus Daniel - April 16, 2020
0
Gunmen on Wednesday killed nine civilians in an attack on a village in central Nigeria, said police, in what one politician describe as...

Eardrum9ja Blog Being in existence since 2015 , we provide you the lastest news , new song release and an explicate of entertainment.
Contact us: eardrum9jablog@gmail.com