The Three Lions trio were subjected to sickening abuse online after the final at Wembley, where they all lost from a spot-kick in a penalty shootout defeat for Gareth Southgate’s men.

Speaking with The Mirror in a recent interview, the Borrusia Dortmund midfielder said: ‘You look at the run into that final and you felt as though the country had united. Then as soon as they missed a penalty, they were not English, just black. Anyone can miss a penalty. Anyone can make a mistake in their line of work. But to be criticised like that should never happen. They are human. 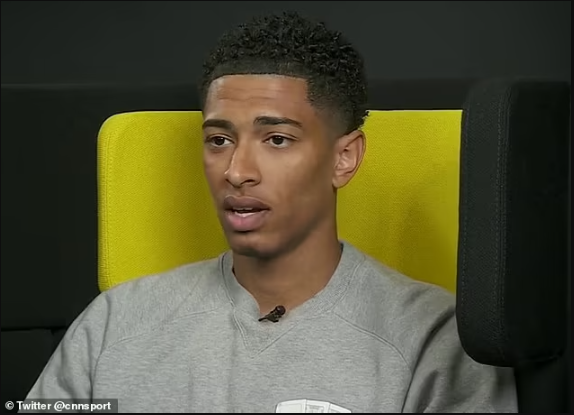 ‘They are all top, top characters. To see them brought down like that was disgusting. As a team-mate it’s hard to take because that could have been me. What if I’d missed a penalty? You’re English for seven games and then all of a sudden, you’re nothing.

‘I know these are select idiots, of course, and it’s not the whole nation turning against them. I’m sure that they probably had a bigger comeback of support. But the only support they should need is for missing the penalty, not for the racism that they’ve received after it.’

Bellingham also believes there are inconsistencies in how football’s governing bodies address racism compared to other issues.

In December of last year, he was fined £34,000 by the German FA for questioning the appointment of referee Felix Zwayer in Borussia Dortmund’s 3-2 defeat against Bayern Munich.

The Dortmund midfielder made a reference to Zwayer’s previous six-month ban over a match-fixing scandal and was made to pay a result. But claimed that there is a contrast when dealing with racist abuse.

‘There’s not a single job in the world where you deserve to be criticised with racism,’ he added. ‘I’ll never forget the first time I properly got a batch of messages. My club were quick to send someone to message me and make sure I was alright and I really appreciate that. I had team-mates message me and family members.

‘I didn’t receive anything from the DFB or FA. And I always kind of compare it to when I said the thing about the referee in December. They were very quick to get into contact to give me my fine, give me my punishment, and kind of make it a big drama in the media.

‘I’ve learned from that. I know what I can and can’t say. I know that sometimes I have to control my emotions better. But, you know, when you give that more energy than the situation I was going through, well – I felt: “Maybe we are alone. Maybe they’re not interested, maybe they don’t care. And maybe it is down to me and down to us to work independently to get our message out.”‘

THE TERMINUS MARKET REBUILD BY JAIZ BANK PLC. AND THE NEEDLESS CONTROVERSIES

THE TERMINUS MARKET REBUILD BY JAIZ BANK PLC. AND THE NEEDLESS...

ABOUT US
Eardrum9ja is your news, entertainment, music fashion website. We provide you with the latest breaking news and videos straight from the entertainment industry.
Contact us: Admin@eardrum9ja.com.ng
FOLLOW US
© Eardrum9ja Blog NG 2015 - 2022
MORE STORIES
NEWS

THE TERMINUS MARKET REBUILD BY JAIZ BANK PLC. AND THE NEEDLESS...