A protracted debate on who is Afrobeats’ key player between Wizkid and Davido, two award-winning Nigerian singers, is ongoing on Twitter.

This is coming on the back of Wizkid’s recognition in an article chronicling major actors of pop music on Grammys’ official website.

The ‘Ojuelegba’ crooner’s mention appeared to have triggered a dispute between his fans and Davido’s, with many questioning why the ‘OBO’ singer was not recognized on the list.

“Currently, Afrobeats is the next international sound sweeping pop music. Major stars like Kanye West and Rick Ross have all collaborated with Afrobeats acts. Drake’s 2016 international hit ‘One Dance,’ once the most-streamed song on Spotify, featured Nigerian Afrobeats artist Wizkid, who would go on to sign with RCA Records in what became the biggest record deal ever for an African artist,” read the article, which was published on December 27, 2019.

“This past July, Beyoncé released ‘The Lion King: The Gift,’ the soundtrack album to the 2019 ‘Lion King’ remake, which featured African and Afrobeats artists like Wizkid, Burna Boy, Mr Eazi and many others. With major labels like Warner Music Group and Universal Music Group betting on Afrobeats, all eyes are now on Africa.” 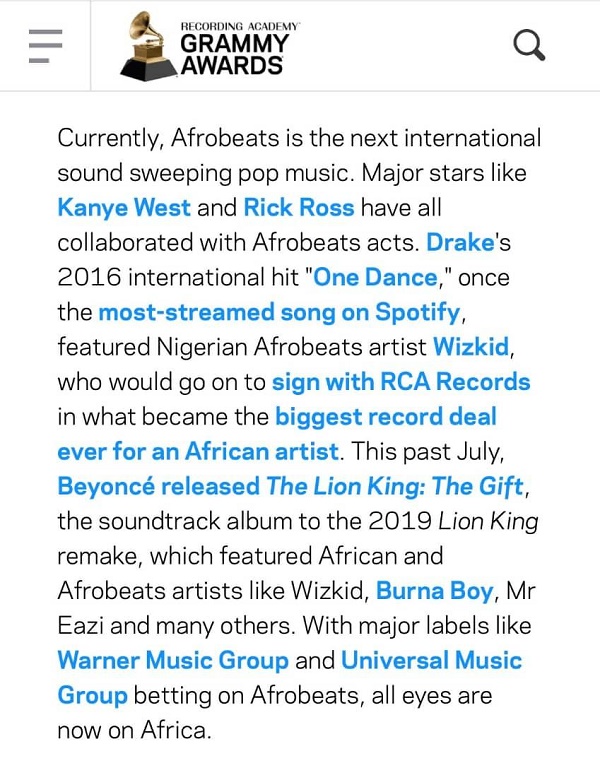 There is no arguing that Wizkid and Davido have been major forces in the country’s music industry, often drawing commendations for their consistency and projects.

The duo had another amazing run in 2019, notching up international collaborations.

Meanwhile, Burna Boy, a colleague of the duo, is one of the nominees for the 2020 Grammy Awards, which would hold on January 26, at the Staples Center in Los Angeles.

Here are some reactions from Team Wizkid:

As seen on Grammy’s page , this is without any form of debate , Wizkid name remains till the end of time when ever Afrobeat is being mentioned . #TuesdayThoughts#MadeInLagos. pic.twitter.com/mhvAzKqjGd

— muzammil (@finemanhocS) January 7, 2ammy confirmed Wizkid’s Sony RCA deal is the biggest by any African act when we thought his $3M UBA deal was his highest, wonder how much he’s getting from Ciroc, Storm Model, Nike, Pepsi & other big brands he’s signed a deal with.

That guy is cashing out big big 💰💰. 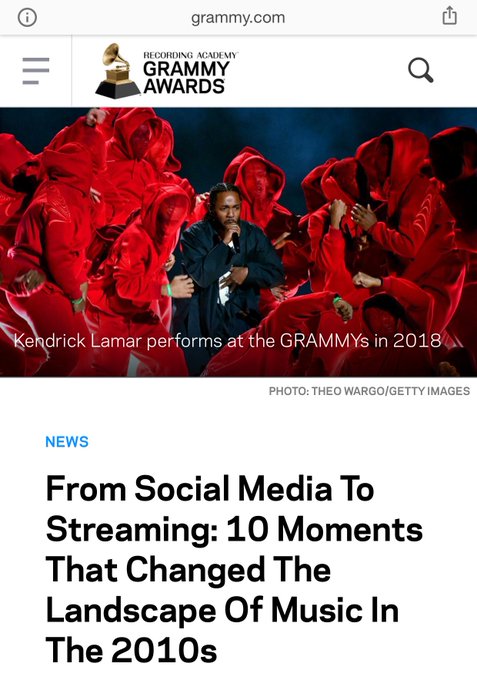 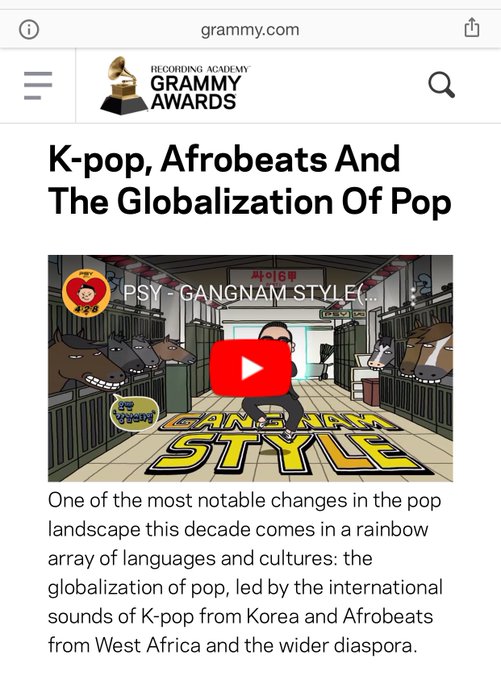 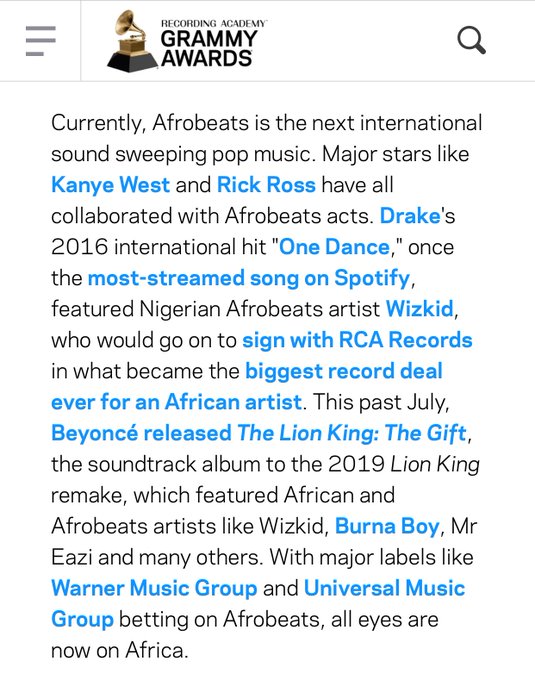 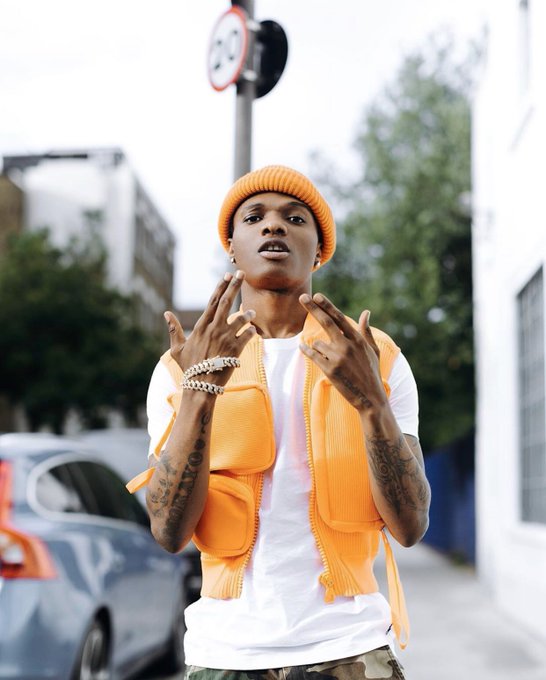 Wizkid needs to blow his trumpet sometimes😪! So these clowns can respect him more. Man legit signed the Biggest record deal for an African Artist with Sony and he didn’t talk about it💔😂!

After much payola in the US soil, these people still don’t know the self acclaimed no1. Everyone knows who the G.O.A.T. is (wizkid). Any other one is just ewu. Periodt pic.twitter.com/Vd1GZSP1gp 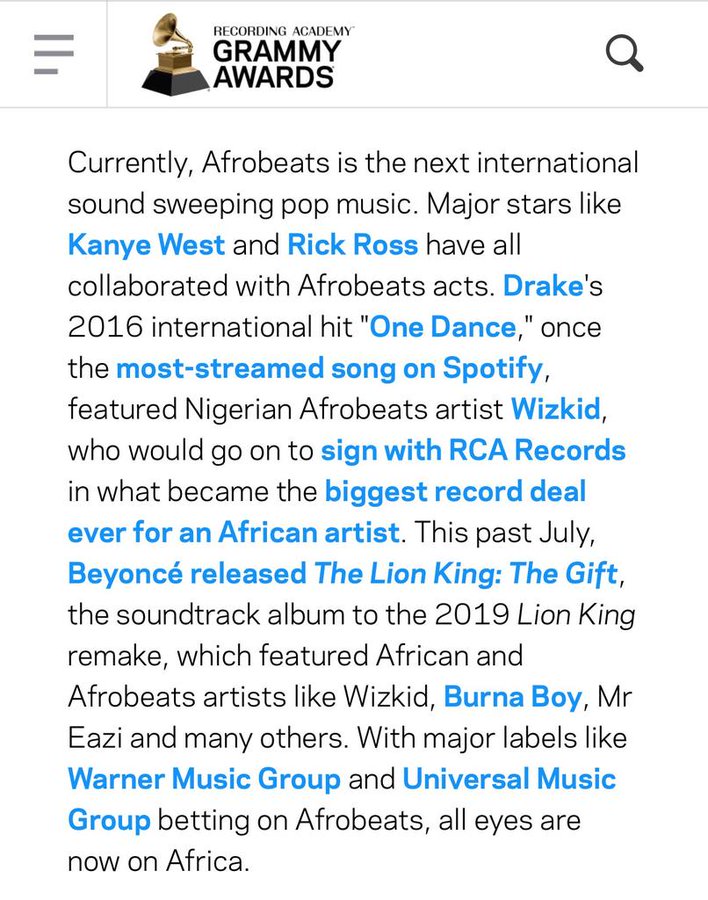 When we say @wizkidayo is the face of Afrobeat they won’t hear…Now Grammy don tell una oo 👂👂#Wizkidfcpic.twitter.com/HI6omMSMfA

my Mood when I see our king 🤴 Wizkid trending back to back for good reasons ::

From Grammy. Read and Diggest I remember telling this polywags that Wizkid RCA deal is the biggest by an African act and it different from that of other…..

So grammy posted this nd fc came across it and ofcourse we were proud nd decided to restan nd hype our GOAT but as usual froggies started crying. This street go wound some people today 😂😂😂😂 pic.twitter.com/DYpDESsBWS

Here are also some reactions from Team Davido:

DAVIDO IS THE ACTUAL REASON AFROBEAT IS NOW WIDELY ACCEPTED WHEN HE RELEASED FALL WITH NO FEATURE THE SONG WENT MAINSTREAM .pure African sound..but now people seem to forget easily BUT LETS GIVE CREDIT WHEN ITS DUE DAVIDO DESERVES IT ALL… pic.twitter.com/nIJRudeV9d

Wizkid tried for Afrobeats no lies, but D’banj and Davido did better by breaking in with their solo songs without any international act, Wizkid’s ojuelegba broke in international because of Skepta and Drake, one dance isn’t even an Afro beat song. Wiz whispered there not song.

Other Artist talk about it, dream about it but King Davido live it.. No 1 from the Black Continent 💯💯 pic.twitter.com/CQCDEs9X13

Don’t stress yourself when you are asked who the no 1 afrobeat artist just tell them👇👇👇
KING DAVIDO AND OTHERS pic.twitter.com/IL7CksKQOh

Copyright 2020 TheCable. All rights reserved. This material, and other digital content on this website, may not be reproduced, published, broadcast, rewritten or redistributed in whole or in part without prior express written permission from TheCable.

ENTERTAINMENT NEWS: STO set out an exclusive valentine event to thrill out all nigerians

University of Jos academic session for 2020

Davido end’s relationship with chioma, unfollow her amid peruzzi scandal

ENTERTAINMENT NEWS: STO set out an exclusive valentine event to thrill out all nigerians

University of Jos academic session for 2020

Davido end’s relationship with chioma, unfollow her amid peruzzi scandal

JAM ALERT! Naira Marley And Tiwa Savage Set To Drop A Song Together

Olamide is the Artiste of the Decade – MI Abaga

A lady claim that Flavour Slept with her and dumped her

I am better than rema-Jhaysings Declares with good reasons (Video)

SONG OF THE WEEK

MUSIQ: Jaycee Ace – Own it [Prod. by Bonitrain]