Ye has confirmed that business mogul and momager, Kris Jenner and her long time boyfriend, Corey Gamble are no longer together.

The news of their split was confirmed via Kanye’s official Instagram page, where he sure had a lot to say about Gamble, like he had been awaiting the perfect moment.

This news comes after Corey was seen hanging out with a much younger lady.

Kris and Gamble met at a party hosted by Kanye West back in 2014, and they became official shortly. Kris has noted a couple of times that he compliments her quite well.

He wrote, “God has a plan to remove the Godless Corey needed to never be here anyway
And I think he’s a nice person Not a great person A nice person who used to be around Puff’s family then got around Justin Bieber and then when Kris got divorced he slid in He became the tv version of a father figure and as he always called hisself “a REAL nigga” He once told my wife he knew what music she should be listening to So when I seen him a week later I had him removed from my daughters birthday party

Now he’s off to his next mission

His job is done

He’s not messy enough to do something like this

It’s on purpose I love Kris This woman is a hero and she’s done what she’s had to do to protect her family and make sure they prosper even if it meant telling everyone not to listen to me I respect her grind her hustle and her mind Kris is one of the best to ever do it“.

Asides the news of their split, another thing that struck a chord has to be Ye making reference to his ex wife, Kim Kardashian as “My wife” in a couple of parts of his lengthy post.

This has got netizens talking as they wonder when the fashion entrepreneur and rapper would back off. 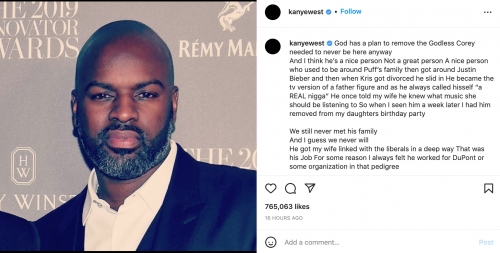 ABOUT US
Eardrum9ja is your news, entertainment, music fashion website. We provide you with the latest breaking news and videos straight from the entertainment industry.
Contact us: Admin@eardrum9ja.com.ng
FOLLOW US
© Eardrum9ja Blog NG 2015 - 2022
MORE STORIES
MUSIC